The original intent of this article was to provide some sort of comparison between a simple DIY sub-kick, the more elaborate commercial designs and the over-blown DIY sub-kick designs found floating around the internet. That didn’t quite happen.

Since the sub-kick has become an indispensable tool in the studio, I was curious to compare my simplistic, cost-effective approach with the more expensive alternatives.

Sub-kick transducers add tons of body to kick drums and are really effective on bass cabs and even floor toms. They’re a must-have for the studio.

For comparison purposes, I chose the Yamaha NS10 as a substitute for the Yamaha sub-kick speaker.

I selected this studio monitor as an example because, with its proven track record, it has often been touted as the classic studio sub-kick. Pre-dating the NS10, Beatles engineer Geoff Emerick first explored sub-frequency transducers (aka sub-kicks) while recording bass for “Rain” in 1966.

What sparse documentation Yamaha offers regarding their SKRM-100 sub-kick varies widely. In some spec sheets, Yamaha states their sub-kick’s frequency response begins at 20hz. Other documentation states 100hz. Others claim 80 hz and yet others 50 hz. So what’s the story? It’s not quite clear what the actual specifications are. Personally, I find it a bit odd that no frequency response chart is available. If the response is similar to the NS10, the EFFECTIVE response would likely begin at the higher end of the sub-frequency range– possibly around 100hz. Although this is only marginally considered a sub-bass frequency, it does suitably fall in the range of most kick drums. 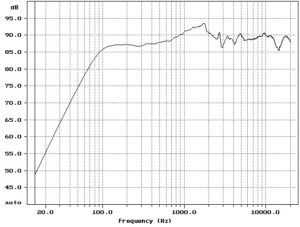 With the NS10, there’s a significant 30db loss of gain below the 100hz mark which is officially considered to be the upper realm of bass sub-frequencies.

The next chart shows the frequency response of the studio standard AKG D112. Despite the smaller diaphragm, it actually appears to handle sub-frequencies a bit better.

The diminished low-end response of the NS10 is probably due to the large amount of energy required to efficiently move the large mass of a speaker cone. Overall low-end response will likely vary widely with the amount of air and mass (SPL) moved. Recording a heavy-footed drummer should show better results.

Setting all theory aside, the screenshots below were taken from a random session and show actual response curves of a very simple DIY sub-kick with no processing.

In this case, a 6.5 ” Polk Audio mw6502 speaker from an old M7 monitor served as the sub-kick. This is the same size as the speaker used by Yamaha with their sub-kick but with a somewhat better low end response than the larger NS10M.

As a sub-kick, the Polk performed admirably. It was suspended directly from the drum lugs using elastic shock (bungee) cord. No resonant shell was used. The output was sent to a passive DI to provide a balanced signal and to prevent overloading of the preamp input. 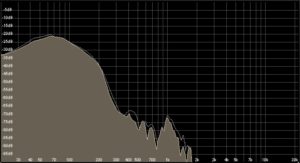 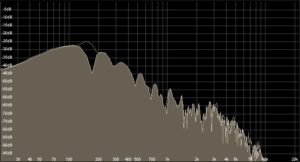 Together, the two mics complemented each other quite nicely and sat well in the mix.

Even without a shell and tuned head, harmonic resonances appear to be visible in the spectrum.

To me, these results demonstrate the fact that a sub-kick need not be expensive or elaborate to provide great results.

As one subkick manufacturer noted–“This mic is really nothing more than a different paint brush to paint a sonic landscape. [A subkick] actually doesn’t increase anything, it simply is a microphone with a different focus range than most traditional mics… to gather more of the frequency range… that traditional microphones are not designed to focus on. Reproduction of 25hz is generally not what [engineers] are looking for as much as capturing the total range of frequencies produced by the sound source. ”

So… why use a commercial sub-kick at all?

There seems to be a lot of curious voodoo revolving around the need for expensive and elaborate sub-kick mics.

It’s not likely the Yamaha sub-kick can capture fundamental sub-frequencies with any better efficiency than the simple sub-kick setup illustrated above. Mounting the speaker in a drum shell with an adequately tuned head could theoretically capture useful harmonics of the fundamental low end frequencies (but not the fundamental itself) thus enhancing the illusion of capturing a powerful fundamental sub-frequency. Pretty cool for psycho-acoustics, actually. Think analog aural exciter. Maybe. Other than that? A lot of it might be another form of psychology since they certainly look cool and, of course, the absence of any high end sure makes them sound more bassy.

My opinion? A simple arrangement with a properly selected speaker routed through a direct box may be all that is needed.